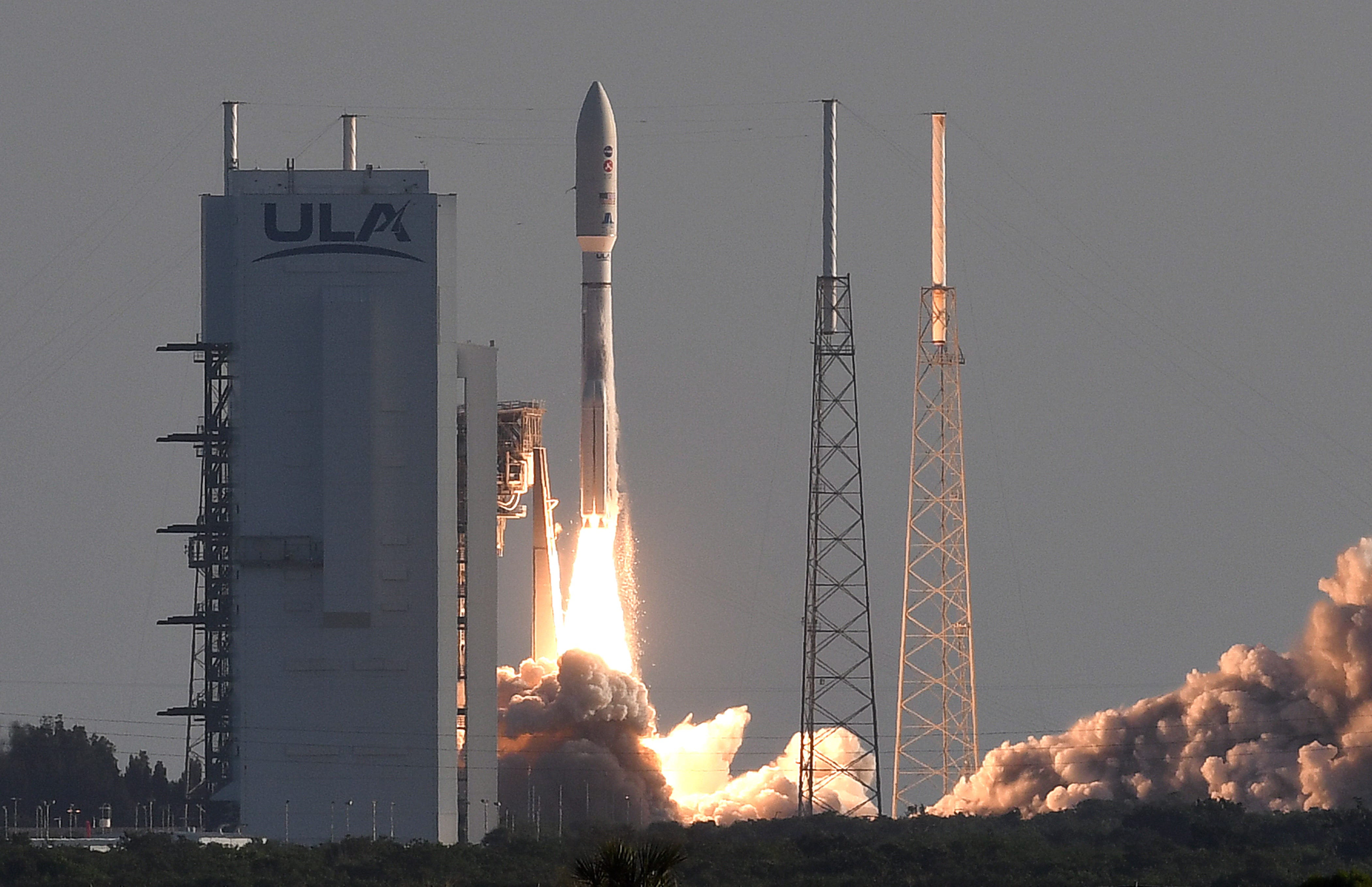 CAPE CANAVERAL, FLORIDA, UNITED STATES – 2020/07/30: An Atlas V rocket with NASA’s Perseverance Mars rover launches from pad 41 at Cape Canaveral Air Force Station.
The Mars 2020 mission plans to land the Perseverance rover on the Red Planet in February 2021 where it will seek signs of ancient life and collect rock and soil samples for possible return to Earth. Paul Hennessy/SOPA Images/LightRocket via Getty Images

NASA’s launch of the Perseverance Mars rover this past week marked an exciting new moment in space exploration, building on over two decades on the Red Planet.

NASA landed its first rover, Sojourner, on the Martian surface July 4, 1997. About the size of a remote control car, it covered about a hundred meters of the course of three months, analyzing rocks and taking pictures. Seven years later, in January of 2004, Spirit and Opportunity, twin rovers which landed a few weeks apart, set to work. Two years later, Spirit got stuck and eventually lost power. NASA called it quits in 2011. But Opportunity trekked onward, ultimately covering 28 miles of Martian terrain before succumbing to a dust storm in May 2018. By then, Curiosity had landed, the biggest and baddest of the Martian rovers.

Curiosity is roughly the size of an SUV. It’s so large, in fact, it couldn’t land using the usual tumble and bounce method of previous rovers. Instead, NASA had to develop a new system known as the sky crane, which used retrorockets to arrest Curiosity’s descent before gently lowering it to the planet’s surface.

Curiosity will celebrate its eighth anniversary on the red planet on August 5, 2020, but it won’t sing itself happy birthday as it did in 2013. That was, sadly, a one-time event. Still, if ever there was a time to celebrate, it’s now. Soon, Curiosity will have a new companion in Perseverance, NASA’s latest Mars rover.

Perseverance launched from Cape Canaveral, Florida at 7:40 AM EDT, July 30, 2020, aboard in ULA Atlas V rocket. Its mission, to continue the work begun by its predecessors. Each of the previous rovers has found evidence suggesting the possibility of ancient life on Mars, or at least conditions suitable for supporting life. Perseverance will embark upon an astrobiology mission looking for signs of ancient microbial life on Mars, specifically Jezero Crater. But Perseverance’s mission has just begun and the road to Mars is long.

Traveling at nearly 25,000 miles per hour, Perseverance has already put more than a million miles behind it. Even at those impressive speeds, it will take the craft more than six and a half months to make the trip. Perseverance is scheduled to touch down February 18, 2021.

For now, the craft, held safely inside its aeroshell capsule, is in coast mode. For the next several months it will traverse interplanetary space, making occasional course corrections. Planets are moving targets, ever-traveling along their orbits. Hitting one from another is, as was so eloquently stated by Scotty in 2009’s Star Trek, like hitting a bullet with a smaller bullet, whilst wearing a blindfold and riding a horse. It might not be as difficult as all that, but it takes precision. Course corrections are needed in order to ensure that Perseverance not only makes it to Mars, as planned, but also that it arrives at the specific intended destination. Its mission depends on not only getting to the red planet safely, but on arriving at Jezero Crater.

The team, back here on Earth, will also use that time to test instruments and systems, and practice maneuvering the rover, with an Earth-bound duplicate.

When Perseverance does reach Mars, it will undergo the most difficult and tenuous portion of the mission: landing. This first stage of this process involves entering the atmosphere at approximately 13,000 miles per hour. This is when the aeroshell will prove its worth.

Entering the atmosphere at those speeds, even an atmosphere as thin as Mars’, ratchets up the temperature by thousands of degrees. The process of landing, from the point of entry into the atmosphere to touching down on the surface, takes approximately seven minutes.

This is what’s known as the Seven Minutes of Terror.

Those moments are so named because during all this time, the team back at home can do nothing to intervene if something goes wrong. And, owing to signal delay, they wouldn’t even be aware of any fatal problem until it was too late to do anything about it. By the time the first signal reaches Earth, telling of the craft’s entry into the atmosphere, it has already either crashed or safely landed.

Instead, scientists and engineers rely on precise planning and engineering to accomplish the landing sequence. Thankfully, Perseverance will use the same process which worked so successfully in delivering Curiosity. So we have some indication of how it will work. Here’s what it looks like.

The aeroshell, with Perseverance inside, will hit the atmosphere. The Martian atmosphere is about a hundred times thinner than Earth’s, which is thick enough to pose a problem, but not thick enough to offer much assistance in slowing the craft down. The heat shield will take on heat somewhere in the range of 2,400 degrees Fahrenheit (1,300 Celsius). Most of that heat will be carried away from the craft. If all goes well, Perseverance itself will experience little more than a warm summer day.

Friction from the atmosphere will slow the craft to about 540 miles per hour, still fast enough to leave a $2.7 billion crater on Mars.

At about seven miles above the surface, a parachute 70.5 feet in diameter, designed to further slow Perseverance’s descent, will deploy. The parachute will endure tens of thousands of pounds of force and something like 9 Gs. At this point, the heat shield is no longer needed and will be jettisoned. More importantly, it’s blocking the ground radar, which is critical to the next stage of landing.

Once the heat shield is out of the way, the newly developed Terrain-Relative Navigation system kicks into gear. It measures Perseverance’s position, relative to the Martian surface, in real-time, reducing the margin of error from several kilometers to several hundred feet. This allows the rover to land in places previous missions wouldn’t have dared, places like Jezero Crater.

Even with the parachute deployed, the craft is still moving at 200 miles per hour toward the surface. It’s slowed down substantially from its initial 13,000 miles-per-hour speed, but it’s still moving too quickly to land safely. The parachute, having done everything it can do, detaches and the craft moves into free fall. That’s when the descent stage kicks in.

An array of eight rocket engines, pointed at the planet’s surface, fire. But the parachute is still above the craft, falling to the ground, so before doing anything else, those rockets need to make a quick maneuver, moving the craft into a new trajectory, away from the parachute. Once in its new location, the radar system examines the landing site and makes any final course corrections before the descent stage arrests the crafts’ momentum.

In order to prevent kicking up too much dust, this stage does not actually land on the surface. Instead, it stops about twenty feet above the ground and lowers the rover to the surface in what’s known as the “sky crane maneuver.” With the rover finally safely on the ground, the cable is cut and the descent stage flies to a safe distance before crash landing.

Having traveled hundreds of millions of miles and endured those few tense moments during arrival, Perseverance will finally be ready to get to work. First thing’s first, a status check.

Perseverance will go through a series of systems checks to ensure there was no damage sustained during the trip. It will take a short test drive and find a place for Ingenuity, a small helicopter stowed in its belly, to set up shop.

Ingenuity is slated to accomplish the first powered flight on another world. Perseverance’s chosen location will serve as a landing pad for five flights, sometime during the first 90 days of the mission. Those flights will be observed by some of Perseverance’s 23 onboard cameras.

Ingenuity has no scientific instruments of its own and won’t carry out any additional experiments. It is intended as a technology demonstration, essentially a proof of concept to see if controlled flight is achievable on Mars.

While controlled flight is a time tested technology on Earth, the Martian environment poses several key challenges. Its atmosphere is much thinner than we’re used to here at home, meaning there is less air available for achieving lift. In order to overcome this, Ingenuity was built light, only about four pounds, and its rotor blades rotate at 2,400 RPM. It also won’t be able to be controlled directly, again because of the signal delay from Earth to Mars. Instructions will be sent in advance and the craft will have a certain amount of autonomy during flight.

If successful, Ingenuity will lay the groundwork for potential future Mars missions, opening an aerial dynamic not currently available. Using the lessons learned from this mission might allow for flying probes to do recon, provide high-def aerial images, and reach locations not accessible by rover.

Once the Ingenuity flights are complete, Perseverance will move on to its primary mission: searching for direct evidence of prior life on Mars.

While previous Mars probes have delivered evidence of the red planet’s potential habitability, Perseverance is the first craft equipped to settle the question once and for all.

Jezero Crater was once a river delta, billions of years ago. Prior research indicates the crater is rimmed with carbonate deposits. Similar deposits on Earth are associated with fossilized seashells and coral.

Given Jezero Crater’s watery past and the deposits present there, the hope is Perseverance may find a fossil record of ancient life there.

Perseverance has a slate of instruments specifically designed for examining the chemical composition of Martian geology. Its SuperCam is capable of chemical analysis and mineralogy. The Planetary Instrument for X-ray Lithochemistry (PIXL) maps the elemental composition of surface materials. SHERLOC (they really went wild with the instrument names) stands for Scanning Habitable Environments with Raman & Luminscence for Organics and Chemicals. It uses a spectrometer and a UV laser to identify organic compounds.

These tools will assist Perseverance in locating suitable sites and places of interest for collecting core samples. Those samples will then be stored in metal tubes for potential later recovery and study.

The plan is for a future mission, currently planned for 2026, to travel to the recovery site with a fetch rover, gather the stored samples, and place them into a rocket that will return them to Earth. With any luck, it will land back on Earth in 2031.

In addition to Perseverance’s biological mission, it will also carry out another technology demonstration, utilizing the Mars Oxygen In-Situ Resource Utilization Experiment. MOXIE will produce oxygen from atmospheric carbon dioxide. The success of this experiment would provide a useful tool for future crewed missions to Mars.

If successful, this technology would provide a way for future astronauts to cull oxygen from Martian air for use as fuel and for breathing.

Perseverance will carry out its mission over the course of one Martian year, approximately two years on Earth. Though, if previous rovers are any indication, this newest addition to the Martian population will outlive its planned mission and continue to provide valuable insight for years to come. Its objectives are ambitious and potentially world-changing. Perseverance will pave the way for future exploration of the solar system, both crewed and robotic, and expand our knowledge of our place in the cosmos. Even in zero-G, it’s a lot of weight to carry.

With the combined efforts of thousands of engineers and scientists, and a little good fortune, we’ll pull it off. Safe journey, Perseverance. We’re rooting for you.